The greatest street photographer of the 20th century. Filmed at the table.

This is not exactly a story about recognition, which the photographer could not achieve for a long time. This is a story about how a man took pictures, just because he loved this business.

You must have heard about the baby nanny who was also the great street photographer of the 20th century? If not, then in short: Vivian Mayer was a simple nanny. Nanny with Rolleiflex at the ready. She raised other people’s children, and in her free time she walked and photographed the simple life of Americans in detail. Everything that her eye snatched out in what was happening. Unfortunately, we will no longer know if she visited art stores, went to exhibitions, and what she herself thought about photography. But the fact of rich observation is obvious: only a person with a cultivated sense of visual taste and vision could shoot like that. 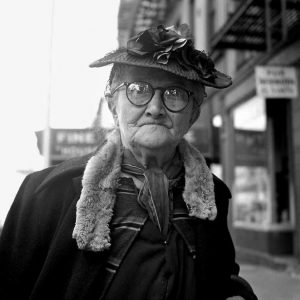 Photo archives for many years were found only after her death. Up to this point… she just didn’t show them to anyone. With this discovery, the world has become one great street documentary more. Perhaps if she lived in our time of social networks and posted her pictures on Instagram, she would have received fame and recognition during her lifetime! The smartphone would replace the twin-lens Rolleiflex, and Apple would include it in its annual “Shot with Iphone” selections. There would be exhibitions, fame and finances not to work as a nanny.

Her story is not like the previous three, whose heroes had to make their way for a long time to be heard. Vivian Maier didn’t even try to do it. More and more filmed films were simply added to the boxes with the rest. If you want recognition, then you definitely shouldn’t do that.

Once upon a time I heard a very well-aimed truth: if someone sings louder than you, don’t try to outshout him, just sing somewhere else. And you will be heard. Perhaps the story of each of the three heroes illustrates this to one degree or another.