Finally got recognized! A couple of years before his death.

It’s hard to imagine, but even at the dawn of the spread of photography, it was possible to do it and still remain somewhere in the shadows. The French photographer Eugene Atget was in just such a situation. The young man began his career as an artist of a traveling theater, but due to low earnings and a ligament injury, he was forced to leave this story and switch to artistic activity. Since 1888, Atget has been painting and photographing the daily life of Paris even before its global restructuring. In a way, this is the great-great-grandfather of street photography. He was an urban photographer, among his works classical urban photography dominates. However, such pictures did not cover the costs at all: Atget tried to earn money in his small studio “Atget – Documents for Photographers”. Basically, these were orders from various artists, which later formed the basis of their works, as a source. Orders were not regular and revenues were meager. 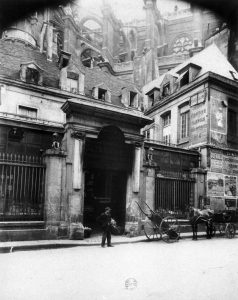 Photographs of plots for artists are a meager income, photographs of Paris are what the author did for himself and with his soul. Atget caught the city’s radical changes: much of what he shot in terms of urban development no longer exists. The atmosphere of old Paris managed to be preserved only on his cards.

In 1925 (two years before the photographer’s death), Monsieur Atget’s studio was regularly visited by the already famous photographer Man Ray with his assistant Berenice Abbott. These two were so impressed by the photographs that Abbott spends all available finance on the purchase of works by Eugène Atget. After his death, it is Berenice Abbott who will become the curator and agent of this vast collection.

The photographer receives worldwide success and recognition in 1981. The head of the MOMA photography department begins to popularize the name of Atget, and his works travel to the world’s largest galleries. 50 years after his death, the French photographer still received recognition.